Is Tim Wakefield our ace? 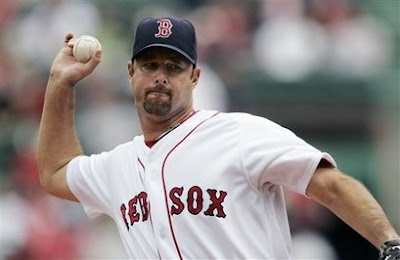 It's the wonderful thing about having Tim Wakefield on the Red Sox pitching staff.

He is signed to a perpetually renewed contract. He is a 2 time World Series champ with the Red Sox who also is the link to the 1986 team. Remember he was teammates with Roger Clemens and Mike Greenwell in 1995.

The number of players he saw come, make their mark and leave Boston is kind of staggering.

And because he is an ancient knuckleballer, you basically treat any win you get from him as the equivalent of finding out there was another $20 bill in your wallet.

His job now is to eat innings every 5th day and give Varitek a night off.

Well we've been finding a lot of $20 bills in our wallets these days.

What kind of pitcher throws a dominating complete game the day after a brutal extra inning loss?

What kind of pitcher starts a prolonged winning streak?

What kind of pitcher extends a winning streak and gets another complete game (albeit a rain shortened one) in the first part of a double header, making sure the bullpen is rested and ready for the nightcap?

Now is he going to continue to be an ace?

Probably not, but every time I've given up on Wakes, he throws a gem.

Maybe that's why he's been around this long.

He's got another start coming up... let's hope there's another $20 in there!

Of course he won't keep this up
Posted by Sully at 1:57 PM