Let's all bow down to the underrated awesomeness of Tim Wakefield 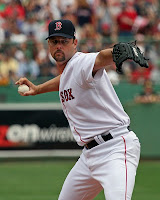 Wakefield threw 7 innings of 1 hit ball yesterday... that's what aces do. This is after he nearly threw a no hitter and pitched a rain shortened complete game.

His awesome win in Oakland jump started this winning streak.

He has 2 wins (which is 2 wins more than anyone thought he'd have.)

Is it time to declare Tim Wakefield (who is third behind Roger Clemens and Cy Young for Red Sox wins) an all time Awesome Red Sox?

I'm not talking "Hall of Famer" or "Superstar" but like a Johnny Pesky. Maybe he's someone so identified with the team that maybe #49 gets retired some day.

This is his 15th season with the Sox. Along the way he has had ups and downs... but it goes a long way to show you how respected he is in Boston that he never wore the goat horns for a second after letting up Aaron Boone's homer.
It shows you the respect that he has in baseball that Joe Torre mentioned him during his post game interview for the 2004 ALCS and implied that while he was crushed, he was happy for Wakefield.
He has given the Red Sox 17 win seasons AND 15 save seasons.
He came up big for the 1995 Division Champs and the 2005 Wild Card team.
And amazingly he has pitched in 17 seasons and has never pitched in an All Star Game. Maybe if he keeps it up this year, he can add that to his resume.
But the most incredible part of his career for me is how he is the link to so many different names, faces and eras of Red Sox baseball.
He was teammates with Mike Greenwell and Roger Clemens... two guys who played for the 1986 AL Champs.
And now he has outlasted most of the members of the 2004 World Champs.
He actually was teammates with Dennis Eckersley, who returned to the Red Sox in 1998. So technically has was teammates with players from 1978, 1986, 2004 and 2007.
The Yawkey family trust was still in control of the team and Dan Duquette was calling the shots when he arrived. Theo Epstein was still in Yale.
Dustin Pedroia was 12.
When he arrived Mo Vaughn and John Valentin were the big bats in the lineup.
Now he has David Ortiz, Kevin Youkilis and Mike Lowell behind him.
Just to give you an idea of how long reaching the Wakefield era has been, here is a partial list of players who arrived in Boston after Wakefield and left before him.
RICK AGUILERA
BRONSON ARROYO
MARK BELLHORN
JOHN BURKETT
ORLANDO CABRERA
MATT CLEMENT
ALEX CORA
COCO CRISP
JOHNNY DAMON
BRIAN DAUBACH
ALAN EMBREE
CARL EVERETT
KEITH FOULKE
RICH "EL GUAPO" GARCES
NOMAR GARCIAPARRA
TOM GORDON
SHEA HILLENBRAND
GABE KAPLER
MARK LORETTA
DEREK LOWE
PEDRO MARTINEZ
RAMON MARTINEZ
LOU MERLONI
DOUG MIENTKIEWICZ
KEVIN MILLAR
DOUG MIRABELLI
BILL MUELLER
MIKE MYERS
TROT NIXON
HIDEO NOMO
JOSE OFFERMAN
TROY O'LEARY
MANNY RAMIREZ
EDGAR RENTERIA
DAVE ROBERTS
BRET SABERHAGEN
CURT SCHILLING
MIKE TIMLIN
UGETH URBINA
TODD WALKER
DAVID WELLS
SCOTT WILLIAMSON
That's a lot of Red Sox coming and going... and yet the knuckler goes on!
Posted by Sully at 11:48 AM