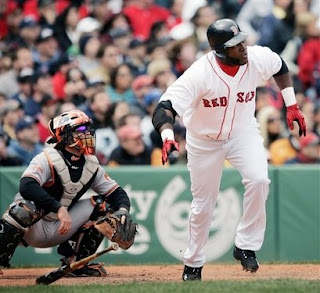 I don't care if the Red Sox were playing the Brownies... I don't care if they started the game at 4 AM to honor Paul Revere... winning 4 games against one major league team are still 4 games.
And after reading all sorts of panic articles and Sky is Falling blog posts about Big Papi, it was nice to see him double and triple.
Come on, admit it Sox fans... when Papi had a double and a triple by the sixth... there was part of you thinking "pop one out and then lay a bunt against the shift!" Nothing like the cycle to break a slump!
He didn't get the cycle, but maybe, like with Paul Atreides, the Sleeper has awakened!
Minimize this game all you want... but the Sox haven't lost since the first "Pissed off" game of the year.
Starting with Wakes' near no-no, they are 5-0.
After the "Pissed Off" game, the Red Sox were 2-6.
The Orioles were 6-3 heading into Fenway.
Now the Red Sox are 7-6 and the Orioles are 6-7. Things are getting back to normal.
At the very least, these are 4 games we don't need to win later!
Posted by Sully at 2:26 PM