No Pressure Hughes or Melancon 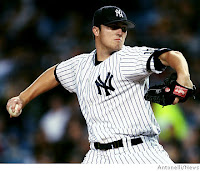 Well it's not even May yet and the Yankees are in overhaul due to Wang's fake injury and a bullpen that has more holes in it than the script of Highlander 2: The Quickening.
And yet with a payroll $65 million more than any other team (and yet they forgot to sign a back up infielder), a new unfilled stadium and sky high expectations, they are turning to two people to change their fate.
Mark Melancon, who before Sunday had appeared in exactly zero major league games...
And Phil Hughes, who Betty White tied his win total for 2008.
And my Yankee fan friends are talking as if they are saviors.
NO PRESSURE GUY!
Just save the season.
Thanks a bunch.
Posted by Sully at 1:23 PM