Hey Advertisers... maybe today wasn't the day to load up on beer commercials during the Angels game 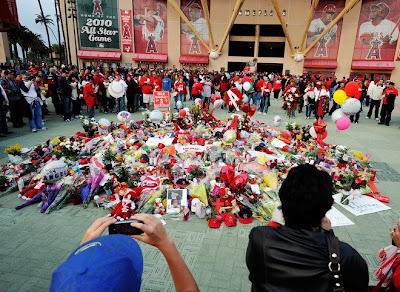 I was watching tonight's Angels/Red Sox game on TV. Obviously I was rooting for the Sox, but I was moved by the tremendous showing of emotion from the Angels team and the fans in Orange County after the senseless death of Nick Adenhart and his three friends.
The makeshift fan memorial outside of Angel Stadium was great.
The Angels did the right thing with the image of Adenhart in center field and wearing #34 in his honor.
The broadcast would often cut to a picture of Adenhart before going to commercial.
And it was a loud, up beat Coors Light commercial.
Now look... I don't drink, so those commercials aren't going to appeal to me anyway.
And yes I know, beer companies are a big sponsor for baseball teams.
But don't you think this night, the night after wild drinking lead directly to the death of a young man and his equally young friends, that maybe the wild fun Coors Light ad shouldn't have been cued up?
Doesn't Coors Light have a more subdued "Please Drink Responsibly" ad campaign?
The next ad?
Was for a car.
I am not kidding. It's not funny. And yet there it was.
I am not making light of this... I can't possibly be the only person who was rubbed the wrong way by this juxtaposition of ads during this game.
People... think before cueing up the ads for the day.