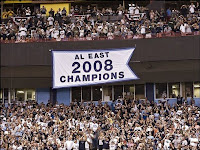 I know I am a little late to the party on this one, but why do the Rays get to raise TWO championship banners?

I know it was a great achievement winning the Division and then winning the pennant... but I thought you raise a banner for the highest honor the team got for the season.

The 2007 Red Sox don't have a flag for the Division, the Pennant and the World Series.

OK, fine... the Rays don't have a lot of practice raising banners.

I'm pretty sure they don't have a "Did you see The Rookie? He played for us" banner.

And raising the two banners was probably great for Pat and Christin and anyone else who was there.

But after this season, just keep the 2008 A. L. Champions banner up.

(And yes, I am bitter that they beat my Red Sox for both flags!!!)