Once again, I compare Javy Vazquez to a stand up comic 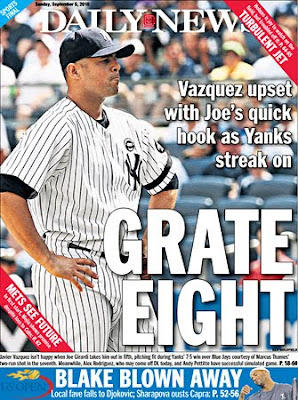 Back when Javy Vazquez was dealt to the Braves in 2009, I compared him to a stand up comic who had one good set and was coasting on this reputation.

Well, Vazquez brought back memories of my stand up comedy days this morning. I remember there were many times I would see a comic absolutely EATING it on stage.

I'm not just talking about not getting laughs. I am talking hostility from the crowd. People walking out. And the comic just... wouldn't... get... off... the... stage.

The MC would be blinking the light and waving their arms to get their attention. Sometimes they would turn music on. I saw one club owner shut the mike off.

And here's the thing that always blew my mind about those comics:
They would ALWAYS complain about being taken off the stage too soon.

They would bitch and moan like crazy. And I would always think "Why would you want to STAY on stage when you are bombing like that?"

I bombed plenty of times and guess what? When I was eating it, I was BEGGING for the MC to get me off the stage!

Which brings us back to Vazquez.
He was brutal this year... as he has tended to be all year.

He let up 5 runs and 8 baserunners in less than 5 innings. And remember he has been taken in and out of the rotation all year because instead of being a #2 starter, he's been a complete bust.

And according to the Daily News he was upset that Joe Girardi took him out of the game in the 5th inning.

"the fact that I got taken out early, that wasn't good."

Um... Javy. You were bombing. Why would you WANT to stay on and get bombed some more?
Girardi was doing you a favor.

Can pitchers with a 5.01 ERA really bitch and moan when they are taken out? As a starter he has a 5.23 ERA and averages less than 6 innings a start (he is a workhorse, remember?) can he really complain about when he is taken out?

You got the light, Javy. Get off the stage!