Wait... was that Mike Hampton? 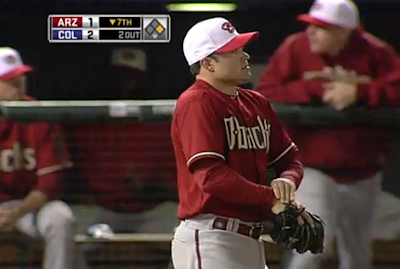 It think it is.
The middle reliever for the D'Backs who let up the go ahead sacrifice fly... the lefty out of the pen. That was Mike Hampton. The same Mike Hampton who helped pitch the Mets into the World Series and then signed with the Rockies in one of the worst contracts in baseball history.

The guy who missed nearly 3 seasons to injuries.
The guy who I put on the Mets Home Grown vs. Acquired Series and the response from Met fans was similar to if I punched a puppy.

Here he is 10 years after throwing the complete game shutout to send the Mets to the 2000 World Series.

He's still cashing a check.
OK, not as big as the ones he got from Colorado... but still. Good for him.

Did anyone else know that Mike Hampton was a middle reliever for the D'Backs? Did I just miss that press release?