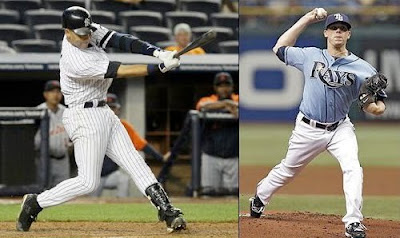 118 games into the season and the first and 21st biggest payrolls have reached a standstill.

The Yankees and Rays are dead even... and chances are both teams are making the post season. (It will take an effort worthy of the 2007 Rockies for the Red Sox to be a factor again.)

And while any suspense to whether or not they will be playing in October, there is concern this year to actually WIN the Division.

Unlike say 2003* and 2004 or 2008 when the ALCS was a match up of AL East teams that steamrolled through the competition, there is a truly formidable obstacle in the way of the ALCS:

The Texas Rangers and Cliff Lee on the road in Arlington for Games 1 and 5.

You want to face him? Granted, both the Yankees and Rays won games recently started by Lee... but how many times do you think you can pull THAT off?

So the two teams are going to play 44 and whomever has the best record will face the White Sox at home. No push over team, to be sure... but homefield advantage and avoiding Cliff Lee is the key.

They play 7 more times against each other.

The Rays have an edge in pitching edge. While they have experienced injuries, they have been able to stick in minor league stud Jeremy Hellickson into their rotation and Soriano has made the bullpen solid.

The Yankees have Sabathia, but Burnett is inconsistent, Vazquez is mediocre, Hughes is up and down and Pettitte is hurt. And oh yeah, no reliever not named Rivera can be trusted.

And schedule wise, Tampa finishes the season against Seattle, Kansas City and Baltimore while the Yankees finish against Toronto and Red Sox teams who would LOVE to knock the Yankees out of the Division Lead.

I wish it were a 3 team race, but 6 games back in the loss column with 7 weeks to play is a bit much to ask for.