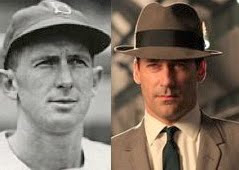 The native from Oregon played in the post war years and saw action in the 1949 World Series and the 1950 World Series. He passed away in 2003.

Was that really Don Draper who played for the Phillies and Dodgers under the name of Dick Whitman?

Does he have a secret ex wife tucked away in Long Beach?

We may never know.