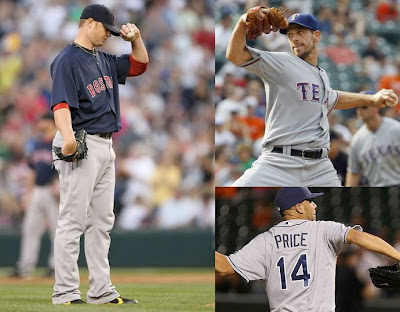 While the National League Cy Young race has been fascinating all year by the number of legit candidates (Roy Halladay, Adam Wainwright, Ubaldo Jimenez, Tim Hudson and with a great September Johan Santana could all win it), the AL race has been kind of lackluster...

It's been a rough few day for the AL Front Runners.
Last night Jon Lester got bombarded.

Tonight David Price was subpar in his game against Oakland.

And don't look now, but the unstoppable Cliff Lee has been ordinary of late in Texas.
He is 2-4 as a Ranger and with tonight's 8 runs in 5 2/3 innings loss, his Texas ERA is up to 4.18. Hardly the numbers of a difference making ace!

The other day I offered up King Felix Hernandez as a potential Cy Young Candidate.
If the front runners keep pitching like this, he won't need my support.

Clay Buchholz and CC Sabathia might emerge as the front runners before long.

The greatest for me would be to see Carl Pavano come all the way back and win it. Then the Yankees would HAVE to make an offer to him.

Why not?
Who else is running away with it?