For Bobby Thomson's sake... Let's pick it up Giants! 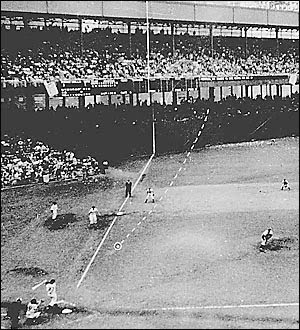 On August 11th, I wrote about how the Giants had about as good a chance as any to win the NL Pennant assuming they made the post season.

None of the other NL Teams were powerhouses and San Francisco could steamroll them through the NLCS.

The Giants have dropped 4 of the next 6 games including the brutal first few games of the Phillies series.

So now the Giants have fallen out of a playoff spot... they look lost and even my dad, the biggest Giants fan I know declared them dead.

While I wrote about the Giants hopes on August 11th this year, on August 11th 1951 the Giants were 13 1/2 games behind the Dodgers before they completed the Miracle at Coogan's Bluff and Bobby Thomson hit the Shot Heard 'Round The World.

Thomson passed away this week and while that was nearly 60 years ago, the home run still resonates in baseball lore and should be looked on as hope for the current Giants club.

OK, there's no Willie Mays or Monte Irvin on this squad. And yeah, their starting pitching is in a huge slump.

There's no 13 1/2 deficit to overcome. In fact if the Giants and Jonathan Sanchez can beat the Phillies and Cole Hamels this evening, they'll be only 2 games back in the loss column with 40 games to play.