I wasn't wrong about the Rangers 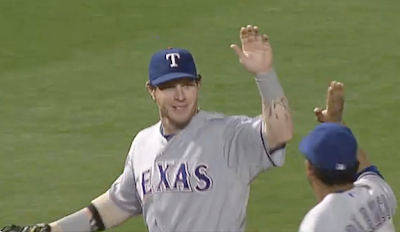 Back on June 21, I wrote that I wasn't buying the Rangers.
I had seen this story before... the Rangers get off to an amazing start, everyone starts thinking they are for real. Then the summer kicks in and they wilt away.
In late June as the Rangers finished an 11 game winning streak (and won 14 out of 15) they opened up a 4 1/2 game lead over the Angels and looked for real.
Since then they've had a losing record (23-25) and in August they've lost 10 of 16 games and 8 of their last 11 games... just as they've ALWAYS done in August.
They've lost 4 straight (including a sweep by the Rays) and it's been nearly 2 weeks since they've won 2 in a row.
In other words my prediction was right.
Here's what I DIDN'T predict... the rest of the Division would be such garbage.
Actually the A's have been good. They've played 6 games over .500 since the Rangers winning streak.
Here's the problem... they were 6 games UNDER .500 then.
Meanwhile the Angels have collapsed to a 20-27 record since and the Mariners? Yikes... they are just 18-31 (and a fired manager) since.
It helps to win a Division when the rest of the teams have to have winning streaks to reach break even.
There's about 3 more weeks until Labor Day.
Can the Rangers blow a 7 game lead? Just ask the Mets if that is possible.
It's still hot in Texas, and I haven't been wrong yet.