Should Felix Hernandez win the Cy Young even with a losing record? 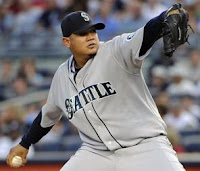 He threw 8 innings of shutout ball, striking out 11.
He is second in the league with a 2.51 ERA. He had thrown more innings than anyone in the American League.

He has one of the lowest WHIPs, is second in strikeouts, and according to Baseball Reference is among the league leaders in a bunch of categories I don't understand.

I don't know what the hell those mean, but they sound impressive.

One thing stuck out at me looking at his line score:
His record in 9-10.

This brilliant season and he is still sporting a losing record. I know it isn't his FAULT. He plays for a lousy Mariners team that is on pace to go 65-97. Frankly going double digit wins for a team like that is impressive.

I think he should be a Cy Young front runner. Is he the hands down winner?
No... Cliff Lee, who LEADS a lot of those categories I didn't understand and a few others that I do, needs some consideration. (Good for him for getting out of his Mariners exile.)

David Price has had a great year. So Has C.C. Sabathia and Clay Buchholz.
Jon Lester looked lke a great candidate before the Blue Jays thumped him last night.

But King Felix should be mentioned as certainly a top 3 candidate.
And only his record might keep him from consideration.

It is similar to when Nolan Ryan led the National League in ERA and strikeouts as well as a bunch of those categories I mentioned before... but played on an Astros team with a woeful lineup.

He finished 8-16 and a distant 5th in the Cy Young voting. Steve Bedrosian won the Cy Young... but Ryan should have won it.

Even if you don't understand them, they should be impressive.