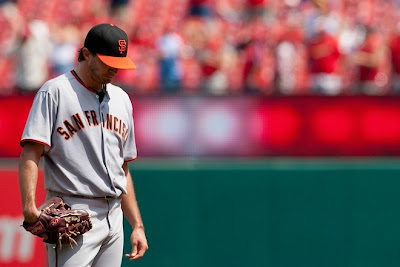 OK... today sucked for the Giants. I mean it sucked in every way a game can suck. 10-0? That's a day of total suckitude that the only positive thing I can pull from the game is I think they looked good with their caps with the orange bills.

It's been a brutal few weeks and with their starting rotation, their supposed strength, looking worse and worse each day and the team in freefall... there's reason to think the Giants whole season is done.

The schedule isn't giving them many breaks as they play the first place and on a roll Reds for the next three games.

But just hang on. The schedule is going to lighten up soon...
The Lowly D'Backs and reeling Rockies and Dodgers are next.

They have winnable games every game after the Reds series for the rest of the month. And they are only 3 back in the loss...

If they can be only 3 back in the loss by Labor Day, they'll play only 7 games against contenders for the rest of the year (the 7 remaining games with San Diego.)

Don't get swept, try and keep pace and know it is better to have your lousy streak in August than in September (or October for that matter!)