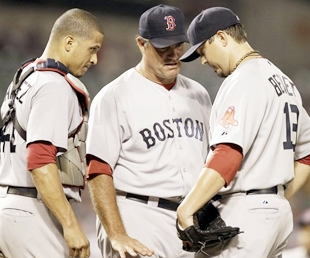 It's over. We all know it.
Heck, the Sox are even dealing away parts for the future.
Even John Tomase's article in the Herald points out that the team is acting like a defeated team for the first time all year.
The Red Sox put up a heck of a fight, but when you can't pick up a game on Tampa against the Orioles... it's a sign that maybe 2010 is a transition year.
I've felt it was a transition year most of the season. But you can't win a playoff spot when one team in your division is on pace to win 100 games, another is on pace to win 99 and your team has had around 20 key players on the disabled list.
It's tough to spark a line up when Ellsbury, Pedroia and Youkilis are all out at the same time.
Beckett actually pitched well again (which bodes well for 2011) but there's too much ground to make up in a month.
It will take a miracle.
And since miracles HAVE happened... I will dutifully keep the tally alive until the Sox have been eliminated (which the Tragic Number is now 24... either Dwight Evans or Manny Ramirez depending on who you ask.)

+5.
Lester goes tomorrow... is that when the miracle begins?