But where was the HUMAN ELEMENT to Brian McCann's homer? 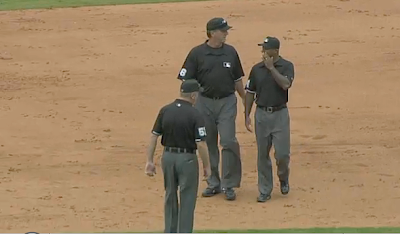 I am sure people who HATE instant replay in baseball were disgusted by what happened in Atlanta today.

Brian McCann hit a ball that was originally not ruled a homer.
It wasn't a walk off homer.

And then the umpires got together... and saw something.

The ball cleared the fence.

It turns out Brian McCann did indeed hit a walk off homer.

And guess what? The cameras caught it. And the umpires, who have a hard job trying to watch things in real time, used technology to make sure the call was RIGHT.

So McCann was able to be credited with what he did.

And the game ended the way it SHOULD have... with a walk off homer.

A team in a tight pennant race gets to win the game BECAUSE THEY DID!

And I'm sorry that it didn't have the "human element" that so many people cling to.

I know it hurts to know that the call was correct and there wasn't the arguing and debating that you think everyone loves to watch.

(Arguing that would have lasted as long as it took the umpires to check the tape and get the call right.)

I know a day like this is rough for people who hate the idea of instant replay.