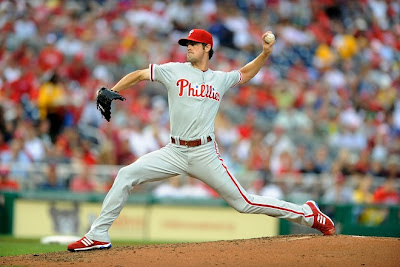 There were many story lines to last night's wild Phillies/Astros opus.

But here's something that got lost in the shuffle:
Cole Hamels pitched great AGAIN... and has nothing to show for it.

When I pitched that Felix Hernandez should get serious Cy Young consideration even with a losing record, one of my readers named Ed wrote "A pitcher's win-loss record must be the silliest stat in baseball."

I don't 100% agree. The pitchers job is to get the team in position to win the game, Ed has a point when evaluating the recent pitching performance of Cole Hamels.

Hamels began the season with a poor April, a good May and a bad June, prompting the Phillies to deal for Roy Oswalt (and basically admit they f---ed up when dealing Cliff Lee.)

But in July, he posted a 2.16 ERA and nearly averaged 7 innings a start, nearly a strikeout an inning and a 2.86 strikeout to walk ratio.

His record over July and August? 1-4.
He is winless since the All Star Break.

He threw 8 innings of 1 hit shutout ball on July 22nd against St. Louis and got a no decision.

He had back to back starts against the Mets recently... one he threw 7 innings, 1 run, 11 strikeouts, no walks... LOSS.

He's been throwing at least like a true #2 and like what most teams would want from their #1 starter. (If he threw like that in Game 3 of the World Series last year, the Phillies would probably be the back to back defending World Champions.)

This is a guy who is pitching lights out and oh yeah... has an NLCS and World Series MVP trophies sitting on his mantle. If he pitches like this in October and goes in the #3 slot behind the two Roys, the Phillies would be so scary that not even Brad Lidge coming out of the bullpen could stop them.

It would be nice if the Phillies could hit for him.
Someone pitching THAT well shouldn't be tied with ME for second half wins.