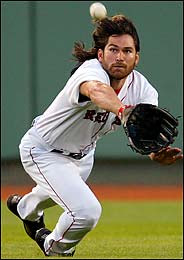 According to ESPN Boston, the Red Sox have claimed Johnny Damon off waivers from Detroit. Now that DOESN'T mean he is automatically going to Boston. That just means in the post Waiver Wire deadline, the Tigers can only make a deal with the Sawx.

Well why not?
Are people still bitter about how he left the Red Sox for the Yankees?
GET OVER IT! That was 5 years ago and the Red Sox have won a World Series since then.

We need to be less petty about things. And wouldn't it be nice to have a GOOD conclusion with a former Red Sox star?

Why does everyone have to be on the Ungraceful Exit Red Sox Team?

We've been starting Bill Hall in left field too often for my taste. Maybe a little bit of Damon's ability and willingness to crash into the wall can rub off on Ryan Kalish.

Who knows? Maybe Johnny can spark a big comeback for the Red Sox.

Either way, I like amicable good byes and if there is tension between me and someone else, I like to resolve it.

Maybe Dice-K can let him wear #18 for the last few months.

I say WELCOME BACK