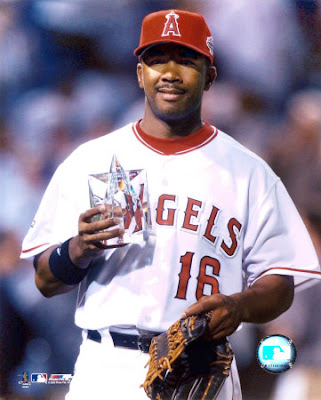 Garret Anderson was designated for assignment today by the Los Angeles Dodgers and unless a team that needs a veteran bat (White Sox? Giants? Red Sox?) picks up Anderson, his wonderful career might be over.

And like my salute to Jermaine Dye, whose career unceremoniously ended this last off season, I felt the need to pay tribute to Anderson. His career wasn't Hall of Fame worthy, but he should always be loved by a fan base. Like Dye, Anderson drove in the World Series winning run.

He is a native of Los Angeles who played for the California Angels, Anaheim Angels AND the Los Angeles Angels of Anaheim.

In his 14 years (plus a few games) in the many incarnations of the Angels, he played more games, collected more hits, doubles and RBI and hit more grand slams than anyone in franchise history.

And he came up big in many big games.
He clocked an 8th inning game tying homer off of El Duque Hernandez in Game 2 of the 2002 Dvision Series that turned the tide of the series in favor of the underdog Angels.

And, much to my dad's dismay, he crushed a 3 run double in Game 7 of the 2002 World Series that gave the Angels a 4-1 lead over the Giants... which turned out to be the final score.

In 2005, again against the favored Yankees, he homered in Game 3 of the Division Series off of Randy Johnson that turned a Yankee advantage into an Angels slugfest. In the clinching Game 5, he homered off of Mike Mussina and drove in another as the Yankees again finished off the Yankees.

The very next day, he homered in Game 1 of the ALCS, sending the '05 White Sox to their lone defeat in the post season.

His career is worth a solid sendoff.

Perhaps he can finish the season (and his baseball tenure) back in Anaheim... or Los Angeles... OK in California where he belongs.