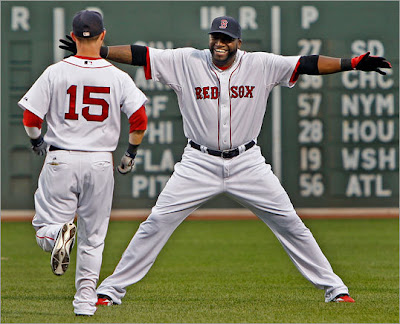 There are a lot of reasons to be happy in Red Sox Nation this morning after last night's 6-0 thrashing of the Angels of wherever the hell they claim they play.

Clay Buchholz wiggled out of trouble in the first and then asserted himself as the ace we've been waiting to see since he threw that no hitter. He will probably finish the season with 17-18 wins and a sub 3 ERA and find himself in the Cy Young discussion. In his last 5 starts he is 4-0 with a 1.20 ERA with averaging more than 7 1/3 innings a start.

Dustin Pedroia came back and while he pulled an O fer, his presence in the line up was a welcomed sight.

And of course young Ryan Kalish put the game away with a grand slam.

For the first time in a while, I am feeling super confident about the chances for the Red Sox... just not for this year.

Last night's win was too little too late for the 2010 season. Not only do the Red Sox need to go on a prolonged winning streak (I am talking 5 or 6 games) but either the Rays or the Yankees need to go in a tailspin.

I'm not sure if you've been watching those two teams, but I don't see either one going on a long losing streak.

Even with the Yankees inconsistent and injured pitching, they have Sabathia who is always good for starting a winning streak and they can (for the most part) slug their way past inferior teams (Bryan Bullington starts notwithstanding).

And the Rays are so chocked full of talent that they are making minced meat out of teams like the Rangers.

Also let's not forget that the White Sox are only 2 games back in the loss column for the Wild Card race.

Too many things have to go the Red Sox way over these last 42 games to make 2010 realistically a playoff year. But players are getting healthy. YOUNG players are contributing. They could have homegrown depth in the bullpen and a pair of home grown aces.

If Ellsbury can come back then centerfield and leftfield could have home grown starters.

If we can get past the notion that we need to make the playoffs every year, then we can see many silver linings on this one.