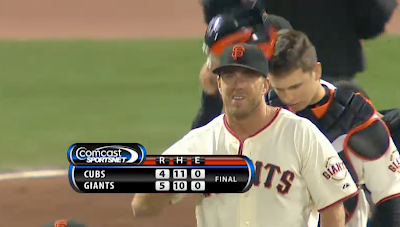 The Giants are my second favorite team. If the Red Sox can't win the World Series, I hope the Giants do.

And call me a glass half full kind of guy... but I am starting to think that might happen.

Now I am not saying the Giants ARE going to win the World Series. Until someone proves otherwise, I am sticking with my pick of the Yankees winning the whole kit and also the kaboodle.

But at this writing, who would you pick over the Giants in the National League?

The Braves? They've got good pitching but they are also taking on injuries and may not even make the playoffs if the Phillies continue their comeback?

The Phillies? Their offense can be shut down... and let me say seven words: "Coming In From The Bullpen... Brad Lidge."

The Cardinals? Lincecum and Cain can match Wainwright and Carpenter. And get past Pujols and Holliday and you can keep them off the board.

The Reds? Might be a little volatile and Giants fans know that Dusty isn't the best in game post season manager in the world.

The Padres? They will probably win the Division, but pitch around Adrian Gonzalez and you've are home free.

The Giants can match up with anyone of them.
They have as good a starting staff as anyone else in baseball. Ray has given them some bullpen depth. And they are starting to hit enough to keep winning.

If they get hot, they can ride the crest into the World Series like the Phillies did the last 2 seasons and the Rockies did in 2007 and the Cardinals did in 2006.

It's as good a year as any to get some momentum into October. And maybe, just maybe my dad can experience some of the joy I had in '04 and '07.

Just remember as I cheer the Giants on... if it were Red Sox vs Giants in the World Series... I would root for the Red Sox to sweep.