Hey Phillies... you call this a Pennant Defense? 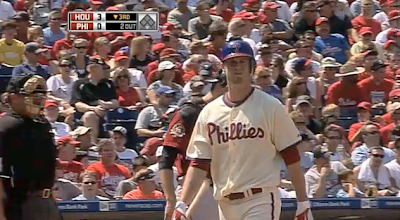 Seriously... I thought you guys were ready for a 3rd straight World Series appearance going into this weeks series against the Astros, who aren't exactly world beaters.

On Monday the Phillies were 2 1/2 games out of first place and were up 3 games in the loss column over the Giants.

And the Braves were thrashed apart by the Rockies, including blowing a 10-1 lead yesterday. This should have been the moment that the Phillies made their big move in the standings.

And what did they do? They dropped FOUR AT HOME TO THE ASTROS!!!!

They not only GAINED nothing but they let the Giants tie them in the loss column for the Wild Card.

They got great starts out of Blanton and Hamels and a monster clutch homer out of Jimmy Rollins. And tonight had Roy Halladay against former Phillie J. A. Happ.

NOTHING! THEY GOT GOTCH!

And now they have to go west and play the Padres. This SHOULD have been the week where the Phillies made a run at the best record in the National League... instead of wondering if the Giants, who are hosting the lowly Diamondbacks, will overtake them.

Then again, the Diamondbacks could be a problem for the Giants... they have nothing to lose... just like the Astros.