I can't help but feel partially responsible for the brawl tonight 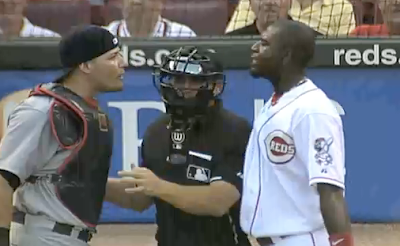 I thought it was fun that Brandon Phillips wants to get the Cardinals' goat.
Why not put a little electricity into a potential rivalry. I mean have the Cardinals and Reds, two of the oldest franchises in baseball, EVER been considered rivals?
Why not start now?
What I DIDN'T expect is to see an all out brawl in the first inning.
But I guess that's what a rivalry is like. It's bad blood. It's "I want to beat you because I don't like you."
I tell you something I found very interesting... not that Brandon Phillips got under the Cardinals skin or that LaRussa and Dusty Baker were at each other (there is no love lost between them.)

It was Scott Rolen going after Chris Carpenter.

Carpenter said something to Dusty that got an f--- you from Baker.
And then Rolen, who earlier was trying to be a peacemaker, went right after his former teammate and fellow 2006 World Series winner.
So Rolen, the former Cardinal and current Red, is smack dab in the middle of this rivalry. And to quote Darth Vader in Return of the Jedi... There is no conflict!
They play tomorrow, 9:30 AM Pacific time, and three more times in September.
This could be good folks.