I guess I have to respect these teams 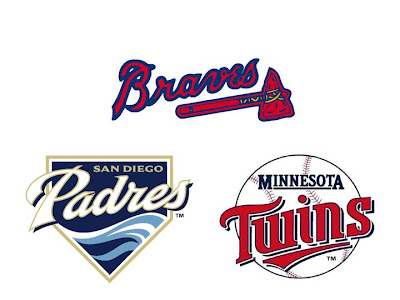 All year long I've been seeing three teams at the top of their division standings and all year I've snickered.

The Braves? Yeah they've been in first every day since May 31st... but they are just keeping the Phillies seat warm.

The Padres? PAH! It's any moment until the Giants catch them.

The Twins? Whatever. I'm rooting for the White Sox and if the Twins get in they'll be 3 and done.

Yet here I sit, with August winding down, and not only are all three of these teams still in first place... they would get Home Field Advantage in the Division Series.

I've been the least respectful of the Atlanta Braves, who have barely received a mention on this blog.

I've not been shy is saying I am not a Braves fan and I guess I've been rooting for the Phillies (as I know many Phillies fans) or the Marlins (they fascinate me as a franchise.)

But wow, the Braves have put together a solid, deep and effective if not spectacular team that can pitch and hit better than most. (And Omar Infante's All Star selection is looking less and less silly.)

I've never been a Bobby Cox fan... but what a f--- you it would be to his critics if he won a World Series without Maddux, Glavine, Smoltz or Chipper Jones for that matter?

I suppose I gave San Diego some credit the other day when I said they would probably be the National League pennant winner.

But that was done more for tongue in cheek purposes to mock the potentially nightmarish World Series TV ratings match up of Tampa Bay and San Diego.

But as of now, the World Series goes through San Diego. They have the best record in the National League, would have home field advantage in the World Series and their pitching staff is outrageously deep. Win every game in pitcher friendly PetCo Park and the Padres will be crowned World Series champs.

I spoke of how the Phillies and Giants were on a post season collision course? There's a possibility that neither team could make the playoffs! 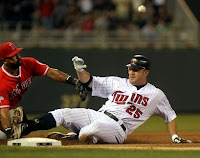 Meanwhile conventional wisdom had the AL East division title being crucial because the Wild Card team would have to begin the Division Series on the road against Texas and Cliff Lee.

Not if the playoffs started today!

Guess what? The Twins have a better record than the Rangers now and would host Game 1 of the Division Series against the Wild Card winner.

Now could a playoff rotation of Francisco Liriano, Carl Pavano, Brian Duensing and Scott Baker hold down the Yankees or the Rays?

And the last two times the Twins had home field advantage (the 2002 ALCS and the 2006 Division Series) they managed a grand total of one win.

But that was the Metrodome. It's a new ballgame and it might be a chilly one for the opposition.

Either way, I'm still rooting for the Phillies, Giants and White Sox in each of these division races. But I must say... grudgingly... the Braves, Padres and Twins have earned my respect.