So THAT'S why the Pirates picked Bryan Bullington first overall! 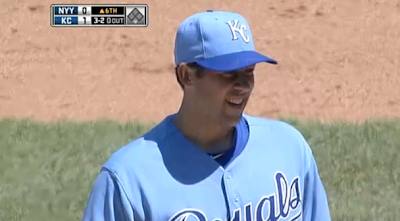 When I wrote my 30 Can't Miss Aces Who Missed post, I had a hard decision: Which former #1 overall pick by the Pirates should I dog pile on?

Despite Benson's mediocre career, I decided to go with Bullington.
Benson never was an ace.
Bullington never won a game.

Maybe it took him 20 games to figure it out, because today he got into the win column... and it was no cheap task.

He pitched 8 shutout innings against the World Champion Yankees and looked every inch an ace doing it.

Of course he did it for the Royals. The Pirates got exactly nothing for their investment. And yes, it would have been wiser to draft Prince Fielder, Zack Greinke, Joe Saunders, Cole Hamels, Matt Cain, Joe Blanton, Jeff Francis, Joey Votto, Jon Lester, Brian McCann or Curtis Granderson indtead of Bullington.

But I can't help but feel good for him. Maybe he HAS figured it out. Maybe the Royals stumbled across a solid pitcher who got his groove back.