Oh for Christsake, just shut Dustin Pedroia down for the year 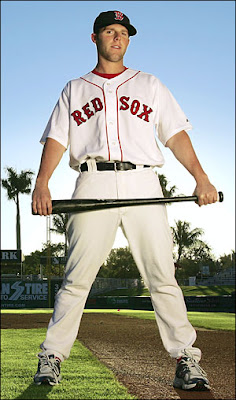 Seriously... we all are impressed by how fast Pedroia came back. He's a gamer. We love him. He's our guy.
Now take away his spikes and say "See you in spring training."
He's back on the Disabled List after 2 games off of it.
And yes, it is because the same foot is hurt.
This is nuts. Why risk injuring our MVP any further?
2010 is a lost cause. Even if the Sox play better than their current pace and win 92 or 93 games, they are still playing golf on the first full week of October.
As I wrote before, 2011 looks promising provided Pedroia and Youk is healthy, Beckett pitches well and they let some of the kids play and fill some holes.
Let's see what this kid Yamaico Navarro can do in the infield. He's supposedly a dynamic fielder. Let's see his do his thing in the show.
He's already the greatest Red Sox player named Yamaico.
So Dustin... nobody is questioning your heart. We're questioning your foot.
And if the Red Sox don't shut him down, I'll be questioning their sanity!