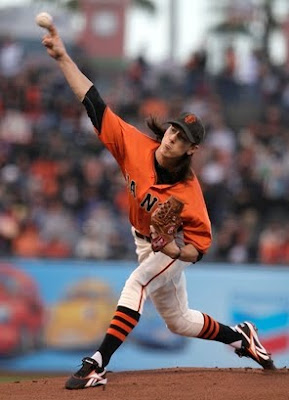 With the Phillies win and the Giants loss last night, San Francisco fell BEHIND the Phils for the Wild Card hunt.

The Giants need to bear down and get into a winning streak, and I think it might be time to do something that would have been unimaginable just a few months ago:

I think the Giants should skip Tim Lincecum's next start.

Yup... it's come to this.
Yes yes I know he only let up one run after the three run first inning bomb to Adam LaRoche... but he's down to 11-9 and frankly is pitching like a SUB .500 pitcher.

Last week my dad said to me they should skip Lincecum's start and I thought he was doing a knee jerk reaction to a loss to St. Louis.

I'm not talking about someone like Cole Hamels having a massive run of bad luck.

I say skip a start... something is messed up in his head and he needs to get his thinking straight.

It's tough to do when you can't shake a losing streak.

Maybe he should call Bengie Molina.