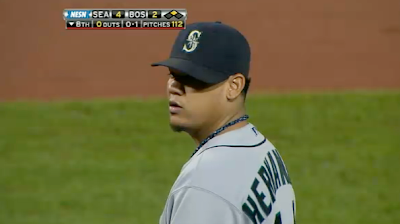 Oh well... my dream of a healthy Red Sox rotation lasted, what? 90 minutes?

Dice-K is down for the count and heading back to the DL probably. Oh well... who were the Mariners throwing up there.

AHHHH. King Felix.
Man alive, it never rains but it pours. The only hope the Sox had for the nightcap was to knock the ace out of the game in the 8th. When they did it, suddenly it looked like a sweep was on tap. AND with the Rays and Yankees losing, I began calculating how much closer the Sox would be and how big the up coming series with the Rays could be.

And then... they couldn't get the runs in.

Ugh. An opportunity lost and once again the need to SWEEP series is shown.

A day off tomorrow... then Lester faces Price.
Dare we dream sweep?

We have no choice if we want to play in October.