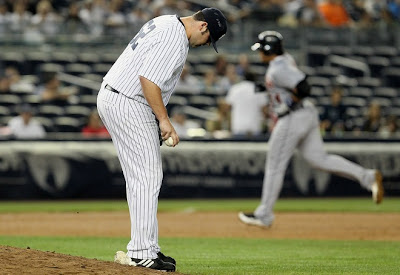 Another day for Joba Chamberlain, another bomb let up.
Remember how he could have fetched the Yankees an ace? Now he is the biggest reason for why the Yankees might not repeat as World Champs.
Their two biggest weaknesses now? Lack of rotation depth and the unstable bridge to Rivera. (Don't believe the weak lineup now. When the leaves will turn brown, so will the shorts of opposing pitchers.)
Joba was supposed to fill one of those roles. Instead his ERA is now at 5.02 and he turned a 2 run game into the 9th into a 3 run game into the 9th. Just what you want from your middle relievers.

Of course Javy Vazquez didn't make the night much better.
While he LOWERED his ERA to 4.89, he threw 107 pitches in 4 innings. I didn't think that was possible.

This coupled with Pettitte's slow recovery makes for a very interesting last few months of the season as the Rays and Yankees jockey for position.

I wonder if Girardi will put Joba or Vazquez in a big game again...

I wonder if he has a choice.