Did the Giants trade their ace away? 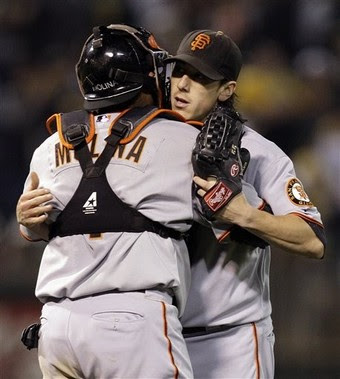 When the Giants dealt Bengie Molina to the Rangers, it looked like a straight forward deal that helped both teams, both directly and indirectly.

The Rangers got a steady defensive catcher in Molina and the least likely cycle in baseball history.

The Giants landed Chris Ray who gives San Francisco much needed bullpen depth. And the trade also opened a spot in the lineup for Buster Posey, who has given the Giants a much needed bat and right now looks like he will win the Rookie of the Year over the more publicized Jason Heyward and Stephen Strasburg.

So it was a perfect trade for the Giants too... right?
Or was it disastrous?

As the Giants are in contention for the Wild Card and hovering around the NL West lead, the main element that makes people think they would be solid in the post season is Franchise, the Freak... call him what you will.

Tim Lincecum is the key for the Giants hopes.

The idea of him pitching twice in a best of 5 series should all but clinch a Division Series.

Seeing him pitch in an NLCS has images of pennants dancing in the Giants head.

And dare anyone dream him starting a deciding game of the World Series?

It would inspire more confidence than Livan Hernandez, I would boldly assert.

Did you see Lincecum pitch last night against the Cardinals?

He was ordinary... and this isn't one isolated start.

He has three straight BAD losses (including 2 where he didn't last past 4 innings.) He has rarely been dominant as of late and actually got my dad to say "They should sit him."

Well maybe he also enjoyed throwing to Bengie Molina.
With Molina as his regular catcher, he was 49-19 and won a pair of Cy Young Awards.

Since then he is a sub .500 pitcher with an ERA approaching 5.

If the answer to his downturn was his pitching to Molina, then this trade that looked so good on first and second glance might be one of the damaging trades in Giants history (yes worse than Liriano and Nathan for A. J. Pierzinski!)

Now of course there are flaws with this theory. His last game caught by Molina was a blow out by the Red Sox and he has thrown a couple of dominating games without him.

But something is wrong with Lincecum... and Giants fans are starting to freak out about the Freak!