There is a pulse... but oh man is it faint 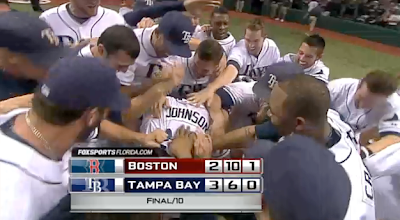 At one point today, everything looked so great.

The Red Sox had a lead late in their game with Tampa.
And C.C. Sabathia was having a subpar outing.

Things were aligning. The Red Sox had a more than good chance of climbing to 3 1/2 games of both New York and Tampa Bay for the best record in baseball (4 back in the loss column) and the idea of a sweep in Tampa became real.

The guy who sunk the Red Sox division hopes in 2008 may have knocked out the Sox playoffs hopes in 2009.

Oh it isn't over... but with a loss tomorrow it will be damn close.

+7... and never has that number seemed so irrelevant.

Does Lackey have a big win in him?

The Sox had better hope so.