Hey John... I think it is over 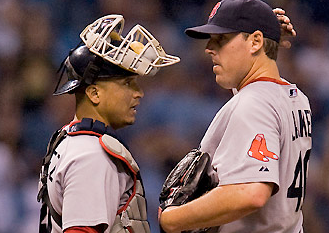 Man, what a difference a few innings made for this weekend and in the end the whole damn season for the Red Sox.

The Sox had a lead in the 8th yesterday, Buchholz was dealing, the Rays bats were dead and it looked like the Sox were winning the series with a shot to sweep...

Next thing you know the Red Sox lost the series and are facing their last game of August on Tuesday looking at a week of games separating them from the post season.

At one point you kind of have to tip your cap and say "Maybe, just maybe we're not as good as the teams we are chasing."

The Red Sox are 10-17 against the Yankees and the Rays...
There's those 7 games in the loss column separating the Sox.

I'm updating the tally... for how much more I am not sure.

Off to Baltimore.
Unless the Rays or the Yankees go on a major losing streak, the season is done.