I told the Mets not to sign Francisco Rodriguez 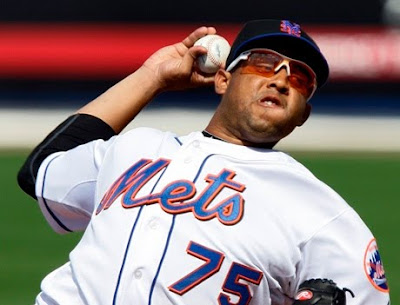 There is a tale of two closers in New York.

Both are from Latin America… both are slight… both have World Series rings… both have experienced the thrill of being the pitcher on the mound when their team wins a post season series.

One, Mariano Rivera, is stoic, clutch, doesn’t let the rare blown save get on his nerves and is one of the classiest and easy to like Hall of Fame legends in Yankee history.

The other, Francisco Rodriguez, beats the crap out of his elderly father in law.

See the difference? It is subtle.

Seriously… I said back in 2008 the winner of the Francisco Rodriguez sweepstakes was the team that DIDN’T sign him.

I’ve felt he was overrated, coasting on the reputation earned in the 2002 post season when nobody had a scouting report on him. (Yet when Bonds figured him out, he launched a homer in the 2002 World Series that I don’t think has landed yet.)

Yeah he piled up tons of regular season saves. So did Armando Benitez. As a Red Sox fan, there were fewer more welcomed sights than seeing Rodriguez coming out of the bullpen in the playoffs. (His 0-3 record with a 7.36 ERA in 3 playoff series against Boston can attest for that… as can Manny Ramirez standing and admiring his walk off homer in the 2007 Division Series.)

But, like Manny, I never anticipated “beating up the elderly” to be on his debit column.

He’s got baggage now… along with a HUGE paycheck. Good luck dealing him. And this is coming of course at a time when, even with Santana’s complete game shutout today, the Mets are floundering at .500 in August.

And while it not seem fair, but this sort of crazy distraction coupled with the season slipping away, could be the nail in Jerry Manuel’s coffin.

Now I’m not saying the Angels are world beaters since Rodriguez left.
But with all their problems, Los Angeles of Anaheim is above .500.

And they drafted Randal Grichuk and Garrett Richards in Rodriguez’s place.

And oh yeah, when Brian Feuntes faced the Red Sox in a playoff situation last year… he came through!

Why don’t teams LISTEN TO ME?