Brad Lidge found a new way to blow a save 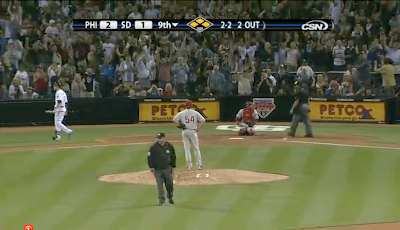 I've seen many blown saves in my day.
And many of them have been by Brad Lidge... but tonight's was a doozy, even by his breath taking standards.

The Phillies can beat the Padres and gain a game on the Giants and pick up a game on Atlanta. Oswalt was on fire... so naturally the ball was handed to Lidge.

And the inning went as expected... lead off single, runners moved up...

Then came the back to back whammies.
With 2 outs and a 1 run lead in the bottom of the 9th and an 0-2 count he HIT Ryan Ludwick to load the bases.

That's awful. But I saw Calvin Schraldi hit Brian Downing with an 0-2 pitch with the bases loaded and a 1 run lead in the bottom of the 9th to tie a PLAYOFF game in 1986.

So Brad Lidge would have to raise his game to impress me with a blown save tonight.

I've never seen that in a game between two playoff contenders.

So with a day game after a night game, the Phillies have to go deep into their pen in an extra innings game and the wonderful pitching duel between Roy Oswalt and Mat Latos is in the garbage.

All because Brad Lidge BALKED in the tying run.


Oh man... Brad Lidge's deal with Satan is getting worse and worse.