Was tonight an ALCS preview? TBS is hoping not 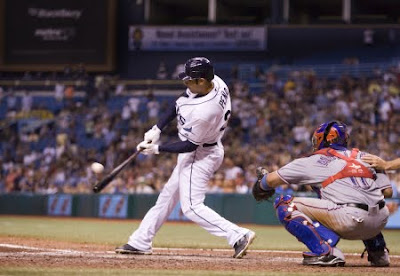 The Rangers are playing the Rays at the Trop and game one of the series was a Cy Young match up of David Price versus Cliff Lee. The game itself was a thriller with the Rays coming back from behind and recapturing a portion of the AL East lead (and be tied for the best record in baseball.)

Both teams are filled with young exciting All Stars playing a brand of baseball that should be emulated across the land. And both are winning big despite financial constraints (the Rays and their microscopic payroll and the Rangers with bankruptcy and changing ownership.)

It could be a playoff preview, especially if the Rays capture the AL East crown, and a best of seven series between these teams (each in search of their first ever World Series title) would be filled with tension.

And it would the match up of TBS' nightmares.

Baseball has a hard enough time getting a national audience... with this series they will stuggle to get a LOCAL audience. The Dallas/Arlington/Fort Worth area would probably be wondering why the coverage of Cowboys practice has been preempted and 13 years and a pennant later, people in Tampa Bay still seem unaware that there is a baseball team in St. Pete.

If baseball had any promotions savvy they would be able to make these teams seem exciting and the antidote to big market teams bullying smaller markets.

Then again, people CLAIM they don't want to see the Yankees play a big market team in the World Series... then the Yankees vs the Phillies gets higher ratings than when smaller budget teams like the White Sox, Astros, Tigers, Cardinals or Rays are in the series.

Baseball will never be football in popularity, but why can't they at least make their product SEEN more? Football can turn a Super Bowl between New Orleans and Indianapolis into a national event.

Maybe when Bud Selig steps down, someone who can MARKET a sport can take over.

(That's right, I had to find a way to blame Selig.)