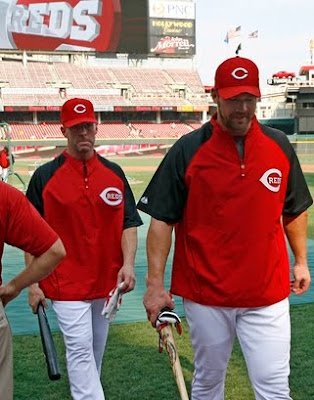 The first thought I had when I heard the Reds picked up Jim Edmonds from the Brewers was "I wonder why the White Sox didn't deal for Edmonds when the trade for Adam Dunn fell through.

But next of course I thought of the Cardinals of the 2000s. In the 2004 NLCS, Pujols may have been the Series MVP, but it was Edmonds and Rolen who supplied the dramatic homers.

Now these huge Cardinals heroes have one duty... take down the Cardinals.

It is an ingenious strategy... get guys who are not intimidated by the Cardinals.

It will be interesting to see the Cardinal fans reaction. The supposed nicest fans in the game will see some of their own trying to beat them.

If the Reds get Pujols, I'll be impressed.