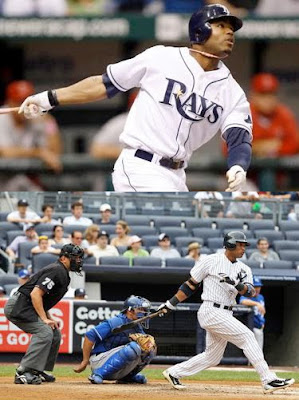 125 games into the season and the Rays and Yankees are dead even.
They are both the best team in baseball, although if they finished tied it looks as if Tampa Bay would win the AL East based on their head to head record.

Now if I told you there would be two teams tied for the best record in baseball... and one of them had lost their biggest slugger to injuries, their veteran World Champion left handed starter was on the DL, their captain was day to day and they seemed to be starting the 15th caller from WFAN 2 out of every 3 starts.

And the other team seemed to have a never ending supplies of phenoms coming out of their farm system and their former #1 pick over all (no not the pitcher who was #1 over all but the outfielder) was finally hitting....

Wouldn't you think the second team has the better chance to win one more game than the first?

It's no longer about payroll. It's about who will do better over 37 games.

Now if the Red Sox start SWEEPING series, they might be in this equation as well... but for now, the two best teams in baseball have 37 games to determine who will start the post season at home.