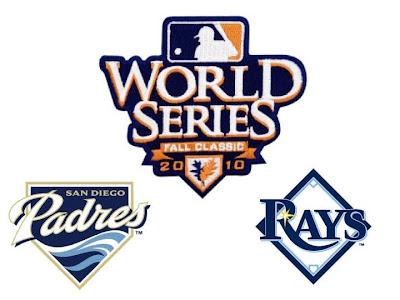 Right now, as I type this blog post at my kitchen table in South Pasadena, I see two teams that should make it to the World Series. 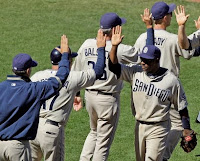 The San Diego Padres are on fire, last night's loss in Milwaukee not withstanding.

Their lineup, other than Adrian Gonzalez, might not be sexy but it gets the job done. And their pitching staff is outrageously deep.

Mat Latos leads a wonderful starting staff and their bullpen is intense. Heath Bell, Tim Stauffer, Joe Thatcher and Mike Adams all have sub 2.00 ERAs! All the lineup needs to do it put 3 runs on the board and it is a Padres Win. This all coming from a team expected to lose 100 games this year.

And Tampa Bay, whose all around talent is nuts, looks like the class of the American League.

They can hit, they can run and hit for power. And their farm system is so deep that they can pull the Reid Brignacs and Jeremy Hellicksons of the world onto the roster and not miss a beat.


You'd think big league baseball would love to see two young and hungry teams clashing in the World Series as a grand event for the game.

Neither Major League Baseball nor Fox Sports show a lot of imagination when they have to promote their sport and the World Series. If a great match up falls on their lap, like the Phillies and Yankees last year, they know they'll have some eyeballs on the screen.

They know the Red Sox breaking the Curse in 2004 was interesting as was the post September 11th classic between the Yankees and the Diamondbacks.

But if they are stuck with a less than sexy match up, they are clueless.

I've worked at Fox and I know a lot of people who have had high profile positions during their baseball broadcasts and they've all confirmed what we all think:

They want the Red Sox, the Yankees, the Cubs, the Mets or the Dodgers. Anyone else is death.

Someone on the Fox Baseball broadcast team told me that when they thought the 2008 World Series was going to be the Dodgers and the Red Sox, it was euphoria. When it turned out to be the Rays and the Phillies, Fox was a morgue.

Well guess what?
The Cubs, the Mets and the Dodgers have about as much a chance of making the playoffs as the Nippon Ham Fighters. And if Jon Lester keeps coughing up 9 runs an outing and Josh Beckett continues to rot, then Fox will be left with the Yankees.

And if A-Rod and Andy Pettite continue to get hurt and Javy Vazquez, A.J. Burnett and Joba Chamberlain continue to suck, the Yankees might not win the pennant.

If the World Series is indeed Padres - Rays... there will be abject panic at Fox.

There shouldn't be. Baseball has to figure out a way to make a series between two franchises looking for their first ever title and young players looking to be crowned champions as a positive thing.

As I wrote in my Ranger vs. Rays piece, football can turn an Indianapolis vs. New Orleans Super Bowl into an event.

So if Tampa vs. San Diego is the worst case scenario, make some lemonade with those lemons. Think of cool ways to market it..

THE DOCK YOUR YACHT AND WATCH THE BALLGAME SERIES


THE "HEY NEW YORK, CHICAGO AND BOSTON... THE WEATHER IS BETTER DOWN HERE AND SO ARE THE BASEBALL TEAMS!" SERIES


THE "HEY, THE TEAM NAMES KIND OF RHYME" SERIES


THE "HEY... YOU CLAIM YOU WANTED TEAMS OTHER THAN THE YANKEES AND RED SOX IN THE WORLD SERIES... YOU GOT IT... ENJOY" SERIES

or how about this one:

THE "WATCH TERRIFIC YOUNG EXCITING PLAYERS WHO DON'T LOOK LIKE A BUNCH OF 'ROIDED UP, OVERPAID FREAKS PLAYING EXCITING BASEBALL AT THE HIGHEST LEVEL FOR A TITLE THAT NOBODY WAS EXPECTING" SERIES

That is just crazy talk.

The World Series should be exciting no matter who plays. The best World Series I have ever seen was Minnesota vs. Atlanta in 1991. Hey, they can both make the playoffs this year. If they played each other, I wonder if Fox would even bring up 1991 in the hype of it?

Give all the combinations some thought, Fox. There's a lot of great baseball players out there... it's YOUR job to get people excited about it.