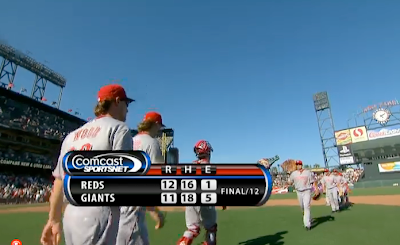 I have said many times that it is better to be blown out than to lose a slug fest. An 11-10 loss is the worst because you can look up and say “Man, if only our pitching was MEDIOCRE today! We’d have won.”

I know some people think I am bonkers when I say I’d rather lose 11-0 than 11-10. But look at today’s Giants/Reds game and think of it from the point of view of a Giants fan (and I know I have a bunch of Giant fan readers here.)

Madison put the Bum in Bumgarner and the bats were dead. You could say “Hey, at least they won the first 2 games in the series to win it.”

But when the Giants came storming back, didn’t you think “Oh man, this could be the biggest game of the year?”

Then when they took the lead, didn’t you have images of the National League Pennant dancing in your head?

Then that ground ball to Sandoval… you thought there were two outs and nobody on… you started getting cocky.

When the game went into extras (and seemed to go on for another 6 hours) didn’t you imagine a McCovey Cove walk off shot for each pitch thrown to the Giants?

Then Votto won it… again. And after all of that you had the same result if it ended 10-1. Except you didn’t spend hours of your life hoping for a moment of euphoria that never arrived.