It's ANYONE'S Division to win but Wainwright's Cy Young to lose 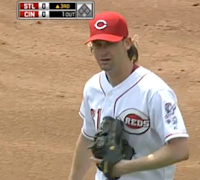 I am sure this is not how Brandon Phillips saw this series unfold... The Reds went from 2 up to 1 back... and Cincinnati has 47 games to get back on track.

If they don't they can look squarely at this weekend as a big time lost opportunity... when they showed they couldn't play with the big boys.

The Reds are part of my "Less Than Magnificent Seven"... the seven teams that went from 2000 to 2009 without making the post season once.

They can get off the schnide with a division title in a month and a half... and the lead in the NL Central hasn't been more than 2 games since May 9th with the exception of one day where the Reds opened up a 3 game lead.

In other words, a tradition filled midwestern team that has a lot of red in their uniform will be playing in October this year... your guess is as good as mine as which one.

But despite Ubaldo Jimene's solid performance last night in New York, Adam Wainwright at this point has to be the Cy Young winner.

He came up big in today's big game that put the Cardinals in first by themselves.

His 176 1/3 innings pitched is second only to Roy Halladay. His batting average against is third in the league.

It's an amazing year for aces, and a strong August and September could put Jimenez, Johnson, Halladay and even Lincecum into the winner's circle.

But right now, it needs to be wrestled from Wainwright.