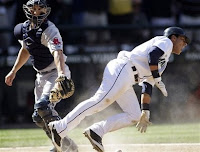 Folks... the good will has been spent.
Three of the last four games have been teeth grinders. And that doesn't include five games ago when the Red Sox blew an early 4-0 lead!
It's official... the Red Sox have squandered as many games as they have stolen.
And if this club has any ambitions of actually winning a pennant... they had better start causing some other fan base to grind THEIR teeth!
Let's update the tally board.