The Name of Angel Stadium 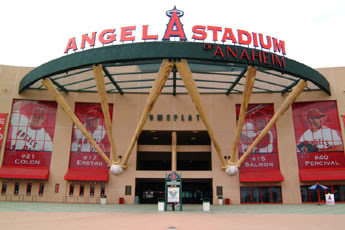 What is it about the Angels and their identity crises.
Now for years the stadium where the Angels played was called "Anaheim Stadium."

It made sense.
It was a stadium. They played in Anaheim.

Not a very creative name, but certainly not a confusing one.

When Disney took it over and inexplicably decided to install the rocks from the Thunder Mountain Railroad in centerfield, they decided to rechristen the stadium "Edison International Field" in the age old tradition of corporate names on parks.

(Before anyone cries for the good old days... Weegman Park was renamed Wrigley Field. It's not new.)

Then Arte Moreno, the most underrated owner in sports, took over and took the corporate name off of it.

Now I personal think they should have reverted back to Anaheim Stadium... the Big A.
But Arte wants people to believe they play on Hollywood and Vine and nowhere near the Orange groves of Anaheim.

If not Anaheim Stadium, I thought that Gene Autry Stadium would have been a good name. After all, Mr. Autry owned the team for decades and poured his heart and money into the club.

But I understand an owner not wanting to honor another park.

For the record, I'd be fine with Arte Moreno Stadium for that matter.

But they went with Angel Stadium. I guess officially it is Angel Stadium of Anaheim... but the "of Anaheim" is written in 8 point Helvetica font on the front entrance.
Look at that picture on the top again for a second.
It says Angel Stadium and has the Angels logo between the worlds Angel and Stadium.
On first glance, doesn't it read ANGELA STADIUM?
How about on second glance?
On the 8th glance, I am still reading ANGELA STADIUM!
That's bad placement of an A.
Maybe there can be a MONA STADIUM, JONATHAN STADIUM and SAMANTHA STADIUM to finish the "Who's The Boss?" series of ballparks.
Posted by Sully at 1:25 PM