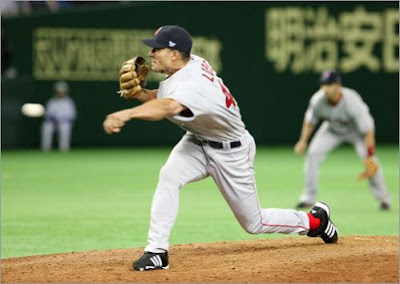 I spent a wonderful weekend with my whole family (my mom, dad, brother, wife and two boys) so I didn't spend a lot of time blogging.
When I'm not blogging, I tend to make little notes to myself for potential blog topics.
One of them was "Why haven't the Red Sox designated Javier Lopez for assignment?"
And of course my reasoning was with Clay Buchholz, Michael Bowden and Daniel Bard all putting up great numbers with the PawSox, what sense did it make to keep throwing Lopez out there just because he's left handed?
I made it clear before that being left handed wasn't reason enough to keep him on the roster.
So I had the whole blog post mapped out in my head... I click on the internet and what do I read?
The Red Sox designated Javier Lopez for assignment to make room for Daniel Bard.
This is why I trust Theo. He knows what he is doing... and now we have a new young stud in the bullpen.
Now I've been harsh on Javier Lopez as a fan. Among friends I have compared then inevitable releasing of Lopez with pulling a bad tooth.
But I trust Francona when he says "He's a nice kid."
And when members of the 2004 Red Sox started leaving one by one, I felt they deserved a send off and a salute from Red Sox fans.
And lest we forget, Javier Lopez has a World Series ring as a member of the Boston Red Sox... something that would have raised him to the level of demigod just 6 years ago!
So thank you Javier Lopez for contributing to 2007.
Hopefully you will land on your feet.
As for the Red Sox bullpen, already deep with Papelbon, Okajima, Ramirez, Delcarmen and Saito (not to mention Masterson when Matsusaka and Smoltz get healthy)... let me say this is already been a fun year... but that tooth has been pulled!
Posted by Sully at 3:36 PM