Sully Baseball thanks Joe Girardi for the win last night 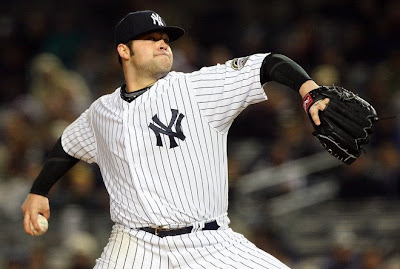 I was driving home last night listening to the game on my XM Radio.

Joba was rolling along in the 6th and I thought to myself "Jeez. We can't hit him. He's going to shut us down!" For the first time the new Stadium was rocking and I was wondering if Joba had taken a turn towards acedom.

It was an emotional day for Joba, with the troubles in his family and the teams struggles with the Red Sox.
The team was wound tighter than the crew of Das Boot and maybe a big win would let off a lot of steam.

Joba overcame his first inning struggles and looked like he was about to take the team onto his broad shoulders and give the 2009 Yankees some hope.

Just then with 2 outs and nobody on in the 6th and the Red Sox totally baffled by the guy... Girardi took him out.

And for that jaw droppingly horrible moment of managing, every Red Sox fan in the world thanks you, Joe Girardi.

For the second straight year, utter insanity has gripped the Yankees front office.

I felt like sending Girardi a thank you note.
It is official... Joba Chamberlain insanity has spilled into 2009. They didn't even let him finish the 6th inning!
At that moment I relaxed. It was only a 4-3 lead at the time, but I said "OK, they'll get some insurance runs and be fine."
Lo and behold the final score was 7-3. A taught game wasn't even a save opportunity by the end.
As a Red Sox fan, I can say I love the Joba insanity, but I am starting to feel bad for the guy.
A big win last night could have blown off a lot of steam for the club and maybe give the team an emotional turning point.

But the lunatics using abaci have determined an arbitrary number of pitches for Joba to throw. And no matter what the game situation is, he MUST be taken out no matter what.
And because of that, the Yankees are hell bent on making sure that the bullpen equivalent of Huey, Dewey and Louie pitch 2 or 3 innings per Joba start.
The tyranny of the pitch count is reaching an insane apex with the Joba rules. They were designed to keep him healthy, and he STILL landed on the DL last year.
Yes I know a young pitcher shouldn't blow his arm out a la Mark Prior... but shouldn't there be a little glance towards "game situation?"

And if they keep this up, they will be like the men in the ward asking to watch the World Series... on TV.
Posted by Sully at 10:37 AM