I claim the authority to fire Bob Geren 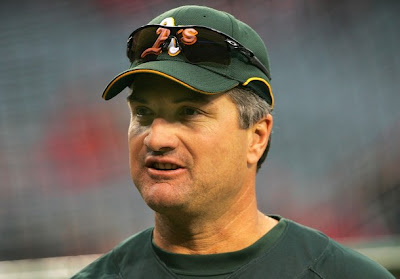 The A's are making my pre season pick look worse every single day!
And the other day, after going through a humiliating 4 game stretch where they were outscored an average of 11.75 to 3.25, the A's were 3 outs away from winning a 4 game series with the Rays.
He had his closer warm. And he didn't bring him in. Tampa tied the game and later won it.
They responded with a lifeless 2-1 loss tonight.
We are at the 25% mark of the season where the front office pushed their chips to the center of the table and the A's have fewer wins than any team in the American League.
This is the equivalent of a citizen's arrest.
I, Paul F. Sullivan, lifelong Red Sox fan, will relieve Bob Geren of his duties as manager.
And in his place I am inserting Chris Chambliss.
Seriously, how could Chambliss have the team in a worse place?
At this point, I bet A's fans would rather have the elephant Stomper manage the team.
Posted by Sully at 11:48 PM