Well that was pathetic, Oakland 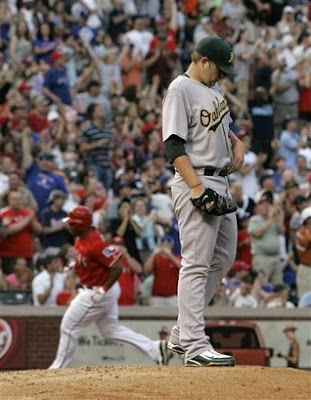 A few days ago I called out the A's and demanded they sack Bob Geren.
They had a big 4 game series coming up (I mistakenly called it a 3 game set) and any hope for the A's to crawl back into it was resting on showing up for this set.
They had 8 games to make up... could they cut it down?
They got swept in a Day/Night Doubleheader (which is almost impossible) and today really showed a lot of heart in a 14-1 massacre.
It's not even June and the A's... the team I picked to win the World Series... are done.
Cooked.
They are 11 games out.
They are the worst team in the American League.
Only the Nationals are worse in all of Major League Baseball.
The only question is should they deal Matt Holliday or have him play out the season and pick up the draft picks?
As for Bob Geren... keep him. He's supposedly great buddies with Billy Beane.
It's going to be really lonely in Oakland, especially in September where I am predicting there will be several sub 1,000 crowds at the Coliseum.
Billy is going to need a friend or two.
Posted by Sully at 8:33 PM