Did anyone notice there were some big match ups today? 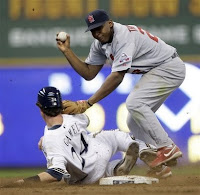 Did you know that two teams played each other this afternoon that were tied for first place in their division?
You would never know it watching sports on TV or checking the sports section, but the Brewers and Cardinals played each other today... winner would be in first place by themselves going into the last weekend of May.
Oh and by the way, the first game of the series was one of the best pitched games you will EVER see with Chris Carpenter throwing a perfect game into the 8th, Yovani Gallardo throwing one into the 6th before Bill Hall broke up the scoreless tie in the 10th.
Did you see the highlights of that?
Didn't think so.
Well the Cardinals (a playoff pick of mine... thank you... no please thank you) are in first.
The Brewers remain a surprise even though they lost a tense 3-2 game today.
Oh and by the way

Tigers rookie pitcher Rick Porcello just won his 5th straight game, giving the Tigers another solid arm in their rotation.
That would be the FIRST PLACE Detroit Tigers, who defeated the second place Kansas City Royals and opened up a 4 game lead over the Royals.
This a day after Zack Grienke threw his 5th complete game victory for the Royals.
Why am I bringing all of this up?
Well, each year there are teams that make the playoffs and people say "Who are these Angels/Marlins/White Sox/Tigers/A's/Rockies/Diamondbacks/Rays? I've never even HEARD of them!"
Start paying attention.
There are great great players out there.
And while I am one to obsess over which Yankee is hitting and missing, or if Manny is playing with his Wii or the fact that David Ortiz still has only one more home run than Doris Day this year... let's start paying attention to who is actually playing winning baseball NOW!
If for no other reason so we can answer people when they say "Rick Porcello? Who the heck is that?"