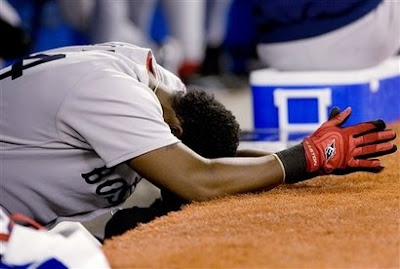 People think I am kidding when I say we need to fake an injury with David Ortiz.
I couldn't be more serious. At this point, if he knicks himself shaving, I want Papi on the 60 Day DL!
Papi on the disabled list I think will start a great domino effect for the Red Sox that could put the Sox in great shape for the long haul. 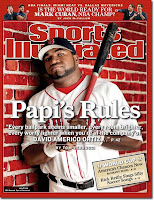 STEP ONE:
David Ortiz, one of the great sports heroes in Boston history, is on the 60 Day Disabled List.
Official reason:
He had a bad dream last night. 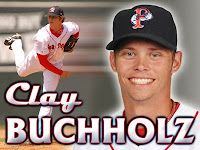 STEP TWO:
Clay Buchholz (Remember him? Our next ace?) is summoned from Pawtucket where he is 3-0 with a 1.30 ERA.

He is inserted into the rotation. 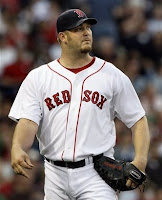 STEP THREE:
Brad Penny is dealt. Yes his 5-1 record looks sexy but his 5.96 ERA and Larry Bowa's rant about his work ethic paint an uglier picture.
However the Sox are in a unique position. His last few starts haven't been bad and it seems like every single team is drooling for pitching.
Peavy is out there (but he's evidently a smidge picky.)
And there is Cliff Lee as well.
Other than those two, who else is really up for grabs? How many people have a pitcher that in 2007 finished third in the Cy Young vote available?
Plus with Peavy not going to an East Coast team, maybe the Red Sox can get the Phillies and Mets scared of each other and pry away a quality minor leaguer.
(Brad Penny is better than Victor Zambrano. I wonder if they have another Scott Kazmir down there!) 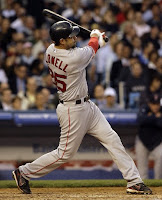 STEP FOUR:
Trade for a young position player.
Imagine swiping a good young position player from, say, the Mets.
Let's say a young third baseman... or a swift outfielder...
Then imagine that player joining the young nucleus with Ellsbury and Pedroia et al.
And then imagine shifting Mike Lowell or J. D. Drew to the DH slot where they can just concentrate on hitting rather than risking injury in the field. 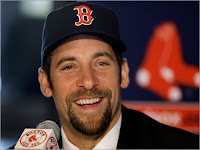 STEP FIVE:
Activate John Smoltz and have him scare the Bejesus out of the young pitchers.
It's always a good thing to have a future Hall of Famer hanging around who was a Cy Young caliber starter AND reliever.
Boom!
You've shored up the rotation, the line up and keep either Drew or Lowell healthy all year.
And all you need is Big Papi to pretend he's hurt!
Come on! The checks will still clear!