Ahhh... those walk off walks 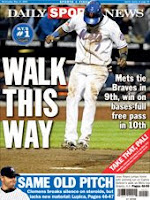 The other week, I wrote how the Walk Off Walk is the stupidest ending to a baseball game I can imagine.
I stand by that.
And yes, it is stupider than the Walk Off Balk.
At least that's a screw up in mechanics.
The Braves allowed the Mets to win a game in the bottom of the 10th because a Major League Pitcher couldn't throw a strike when the game depended on it.
It doesn't quite make up for Kenny Rogers walking the Braves into the 1999 World Series... but it is still stupid.
The worst thing that could happen with a pitch down the heart of the plate is a walk off grand slam.
Inexcusable. It's a good thing I don't care about the Mets nor the Braves!
Posted by Sully at 7:49 AM